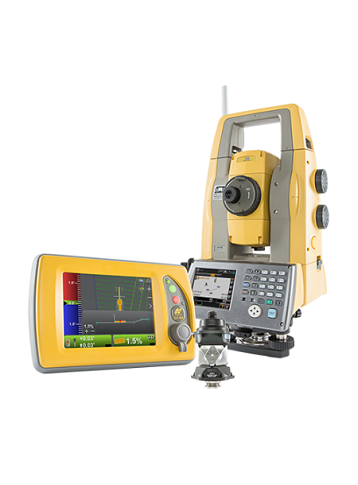 3D GPS+ and 3D-millimeter GPS+ systems work extremely well when machines are capable of receiving GPS satellite signals, but what happens when the jobsite does not have visibility to open sky? Working between buildings or in heavy tree coverage can limit the performance of a 3D-GPS controlled machine. In these situations PS Robotic Total Station (Local Positioning System) is ideal.

Rather than GPS signals, PS Robotic Total Station utilizes a high-accuracy, fast auto-tracking Total Station to maintain machine position information via machine mounted prism. As it tracks the machine/prism, the Total Station maintains exact machine position / grade information per an internally loaded digital site plan. Grade adjustments are then transmitted to the machine 20 times per second via radio from the Total Station. It's simple, reliable, and the perfect alternative when GPS reception is limited. Compatible with Topcon's machine mounted GPS grade control components, it's a quick and easy change to swap LPS for GPS and keep productivity to a maximum.

Based on our popular PS robotic total station platform, the PS Robotic Total Station offers high accuracy position control over your entire site, to within a few millimeters. Topcon's new robotic total stations utilize the patented XTrak technology to track machines at speeds up to 35 MPH. Machine and blade position is updated 20 times per second, fast enough to meet the tightest jobsite specs. This speed and accuracy makes difficult and complex sites easy to grade.

Switching existing GPS+ systems to PS Robotic Total Station is simple. Put up the total station on a control point, place a 360° prism on the vibration pole and a radio in the MC-R3 and you're ready to go to work. The robotic total station locates the 360° prism and sends the X, Y, Z position of the cutting edge to the machine via radio link. The operator can now work as before, but with very high accuracy. Obstructions to the sky no longer hinder your work or slow you down. Whatever the conditions are at the job, PS Robotic Total Station can help you get it done fast and accurately.

Topcon's MC-R3 houses the PS Robotic Total Station controller and radio board in a built-to-last housing.Providing either solid brackets for permanent mounting or magnetic mounting for portability. A built-in MINTER panel provides status lights and function keys for easy performance verification and system checks. The MC-R3 can be easily upgraded to add GPS capabilities providing the utmost in system upgradability.