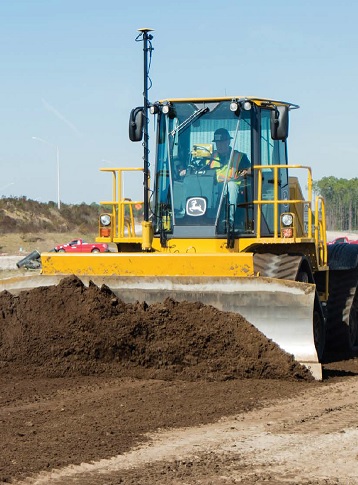 Think about it: what would it mean to your company's bottom line to have a single dozer doing the work of two 3D dozers at speeds and smoothness comparable to a grader; to save time and money on every pass and every job? With 3D-MC2, it's not just possible, it's guaranteed!

3D-MC2 will drastically change the role your dozer plays on a typical site, in some cases eliminating the need for a grader. It will also allow you to make more efficient use of your dozer. Along with speed increases, 3D-MC2 means fewer passes resulting in much more work done in less time. Less time equals less fuel and less machine wear. Most importantly, it means your dozer can spend more time making you money in another location or on other jobs.

3D-MC2 utilizes Topcon's GX-60 control box, GPS+ antenna, MC-R3 receiver and new 3D-MC2 sensor and pairs them with advanced new controlling software to provide position updates up to 100 times per second. The MC2 sensor combines a gyro, compass and inertial sensor to measure the X, Y & Z position as well as the roll, pitch, yaw and acceleration of the dozer.

If it sounds like rocket science, it's because in many ways it is. But your operator's won't find it any more difficult to use than the MC systems they're already familiar with. In fact, if they've used the competition's systems, they'll find Topcon's 3D-MC2 a whole lot easier to use!

3D-MC2 is built on our easy to use GX-60 interface. This interface has proven so easy to use that customers tell us their less experienced operators are able to perform near the level of their skilled operators.

Topcon's MC-R3 is the heart of Topcon's 3D GPS+ system. Providing either solid brackets for permanent mounting or magnetic mounting for portability, the MC-R3 contains all of the GPS receivers, radios, and controllers in a single "built to last" housing. A built-in MINTER panel provides status lights and function keys for easy performance verification and system checks. The MC-R3 also features an Ethernet port, increased processing power over the previous generation box, and additional valve drivers to account for the widest array of machine compatibility.