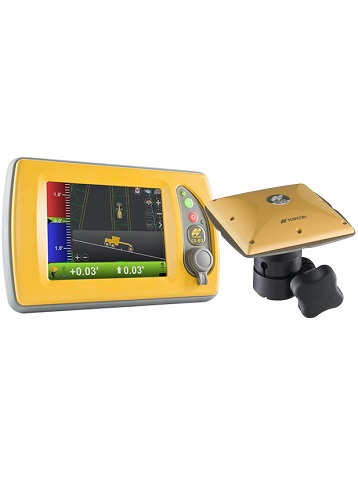 For road building, site work, contour grading, or any other complex surface grading requirements, Topcon's 3D GPS+ will increase money to your bottom line – where it counts. With the reality of nearly eliminating grade stakes, providing unmatched material control capability, and the simplest user interface in the industry, you are sure to integrate Topcon 3D technology successfully into your business.

We make sure the investment you make today will work for you in the future. Topcon's building block design allows you to add new sensors or technologies to your system such as Millimeter GPS and Networks as they become available without having to buy a whole new system.

It's time to simplify grading and increase profits. It's time for Topcon 3D GPS+.

Topcon's MC-R3 is the heart of Topcon's 3D GPS+ system. Providing either solid brackets for permanent mounting or magnetic mounting for portability, the MC-R3 contains all of the GPS receivers, radios, and controllers in a single "built to last" housing. A built-in MINTER panel provides status lights and function keys for easy performance verification and system checks. The MC-R3 also features an Ethernet port, increased processing power over the previous generation box, and additional valve drivers to account for the widest array of machine compatibility.

Topcon's 3D GPS+ can be used in combination with other grade sensors such as Sonic Trackers®, slope sensors, and laser receivers. Find out more here.

For use with Motor Graders, Bulldozers, Compactors, Scrapers and Box Blades.